My senior year of college I worked out a deal with my parents (to cosign), so I could get a new car. I ended up leasing (da daa daaaaa) a brand new 2013 Toyota Tacoma truck.

The terms of the lease contract were $400 a month for 36 months. At the time, the Toyota Tacoma was my “dream” car. I thought it was so”cool” to drive a truck and I was impressed with the cool features and performance. I didn’t think very far ahead at the time. As long as I could make my payments with my part time job I would be in the clear.

Fast forward about a year and a half into paying off my Student Loans in mid-2015, my lease was set to expire soon, so I needed to make a decision. I realized it wasn’t a good decision to keep paying $400 a month for a car (depreciating asset). That $400 a month payment was keeping me from my goal of becoming debt free, so it had to go ASAP.

Related: 4 ways I saved and doubled my Student Loan Payments

I wanted to find something that was fuel efficient, reliable, able to last for a long time, and mid-sized. Toyota, Honda, Hyundai, and Mazda came up on the top of my list to research due to their reputation for reliability.

Eventually, after a few months of research, it came down to Toyota RAV4 and Honda CRV. To be honest, I was fine with either one. In the end, I chose a used 2010 Toyota RAV4 over the Honda CRV. My goal was to spend a max of $10k, and there weren’t as many CRV options at that price point. The Toyota RAV4 hit all my requirements – Reliable, mid-sized, fuel-efficient (28  MPG Highway), will last a long time, etc. 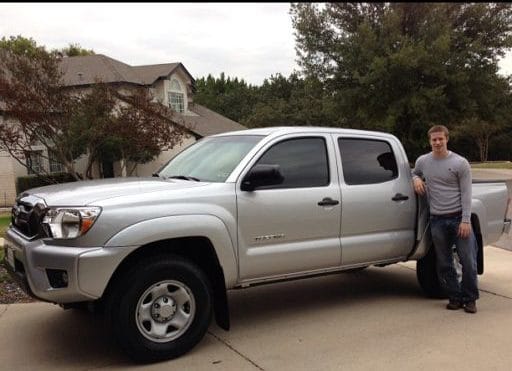 The only good thing about leasing was that my Tacoma held its value very well after the three years I leased it. At the time I had about 36k miles on it and was retailing for $26-$28k at dealerships around my city. The Kelly Blue Book value was somewhere around $24-$25k. Since I had been making $400 payments for 36 months I paid about $14k thus far (Yikes!). I had a balance of a little under $18k if I wanted to buy.

After debating, I decided my best option was to sell. I could have sold privately if I wanted. However, after research, it was more convenient if I sold to a dealership and did a “buy and trade.”

I went to a half dozen dealerships around town in Austin and San Antonio and received offers from $19k to $22.5k for the Tacoma. However, none of the dealerships had anything I was looking regarding a used Toyota RAV4 or Honda  CRV (I made sure to get documentation of the offers).

I went to a Toyota dealership outside of San Antonio the last Saturday in September 2015 (The best time to visit car dealership is at the end of the month and the end of a quarter because the car salesmen are trying to meet their monthly and quarterly sales goals). Visiting the dealership on this day gave me the best opportunity to find a deal. If it didn’t work out on this day, I would have most likely bought privately.

I had called in the day before and told them which car I was targeting. The dealership was packed when I arrived on Saturday with my Dad (for moral support). I told the guys in the front that I was here to meet with a particular man to talk about a used Toyota RAV4 and a Tacoma trade-in. The man came out but was busy with another sale, and I got passed on to a young salesman (younger than me).

I drove the RAV4, and it was what I thought it would be. It was a used 2010 model, good Carfax history, under 100k miles, etc. The salesmen also did an assessment of my Tacoma for trade in value.

After months of research and visiting multiple dealerships I knew exactly how much I could get for my Tacoma and how much I would pay for the RAV4.

The young salesmen came in and offered (with a straight face) $19k for the Tacoma trade in and $12.7k for the RAV4. I was shocked at the low ball offer. He went on about how the minor scratches took significant value off the Tacoma and how I was getting a great overall deal.

With the $22.5k Tacoma trade offer in hand from a previous dealership I had to go all in and showed him how I got a much better offer elsewhere. I told him I knew exactly how much each car was worth. I gave him the paper with the $22.k offer and said I want the following:

At this point, he knew I called his bluff and was serious about the offer. He said that deal wasn’t possible, but he was going to check. He got me to sign a white piece of paper with the offer I proposed.

After 10 minutes of waiting he brought his manager in with him. The manager was in his early 50s, and I could tell he had a lot of experience in sales. He told me the deal I was looking for wasn’t possible, and they couldn’t give me $23k for the Tacoma trade-in. Luckily, I had come prepared and printed out a listing for my same truck with 15k more miles than mine that they were selling for $27.5k. After I had shown him this, he agreed to the $23k trade in but said I couldn’t get the RAV4 at the price I wanted.

He mentioned he couldn’t go any lower on the RAV4. I was about to stand up and leave, but since I got the $23k offer already, I wanted to make a deal. Reluctantly, I offered $10.5k for the RAV4 and said I would walk out if you don’t accept. He immediately got me to sign a blank paper with the offer. After 20mins of waiting the young salesmen came in and said the offer was accepted.

I had visited my local credit union a few weeks before and applied for a small car loan and was able to get a 1.65% interest rate. I applied this when purchasing the RAV4. 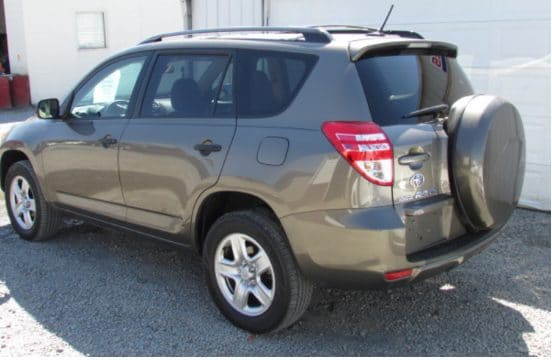 Reflection of the Experience

If I were to do it all over again, I would probably change a few things.

Other than the minor changes I listed above I was happy overall with my first car buying experience. I got the dealership to pay an additional $4k for my trade in and took off $2k off the RAV4 price, which equaled over $6k in value from the first offer. Not bad for a newbie who did a little bit of research.

Since I’ve been prioritizing paying off my Student Loans, I have been paying the minimum on my car each month. I have a little over $2k remaining on my car loan. I plan to pay it off next month (April 2017) and will be officially debt free!

By making the change from a truck to a mid-sized SUV, my cost of gas has decreased ~$80 a month. Check out my 2016 Spending Recap for more savings details.

I have also taken more pride in maintaining my RAV4. I learned how to change the oil, change transmission fluid,  rotate my tires, radiator flush, wheel hub replacement, and (last week) replace brake pads. With a little help from friends, family, and Youtube I was able to learn so much about my car and save a ton of money in the process. Currently, after a year and a half owning I put on about 19k miles on it, the total is 118k miles. I hope to own it when it has over 300k miles or 15+ years!

What was your first car buying experience? What would you do differently?

Gary is the author behind Debt Free Climb, a blog that shows how to live intentionally, pay off their debt, build a side income, and travel the world

Gary's favorite free financial tool he’s been using since 2017 to manage his net worth is Personal Capital. Each month he uses their free Investment Checkup tool and Retirement Planner to track his investments.


His favorite way to save automatically is Capital One Performance Saving, a bank that allows him to create multiple high-interest savings accounts and create an automatic savings plans for each account. He uses these features to meet short and long term savings goals.

His favorite way to save money on car insurance is by using Root, an app-based car insurance service. He saved $240 this year after switching from Geico to Root

Latest posts by Gary (see all)